wiki: Pacahuara people are an indigenous people of Bolivia. A small group live in Tujuré, a community located near the Chácobo people on the Alto Ivón River in the Beni Department. The Pacahuara community on the Alto Ivón River began with the efforts of Summer Institute of Linguistics missionaries. Another uncontacted group of Pacahuara, with 50 members in eight families, lives between Rio Negro and Río Pacajuaras in the Pando of northeastern Bolivia, near the Brazilian border.Hunting and fishing are traditional activities and even to this day vital for their livelihoods...


The Spirit Wolf ¹: The fishing was good on the Manupare River, though I used a spin rod and steel leaders as the teeth of the piranhas could easily bite through the clear line I would normally use. I would go and see the cook before jumping in a motorboat many an afternoon and go fishing. The catfish I caught were large, but it was more fun to catch the white piranhas which inhabited the same waters.

I stopped at an area that looked promising, near a collection of reed-roofed huts one afternoon.

Pacahuara: A Pacahuara man, a man in the twilight years of his life at the age of 45, and his grandson, watched me from concealment near their home on the Manupare River, deep in the Amazon River Basin.

"That sure is a strange fella," said the elder. "Maybe he's one of those missionary people, but I've never seen anyone with equipment anything like this."

"What do you think he's doing, Grandpa?"

The old man sat on the forest floor and gazed thoughtfully at The Fisherman for several moments before turning his leathered face to his grandson. "Well, it's obvious that he's fishing," said the elder, observing me catch and release yet another white piranha, "but he is doing it wrong. All the fish are getting away!"

"Maybe he needs our help, Grandpa." said the boy, thinking of his father, excitement pitching his voice upward. "Maybe," thinking The Fisherman just needed a little help and this would be a kindness, "I can show him how to do it properly!"

The Spirit Wolf: I asked if he wanted some fish, but he didn’t understand my words, so I made conveying motions with my open hands and he nodded his head. I laid two fish on the shore for him, removing the hook with a set of pliers.

“Peligroso,” I said, pointing to the sharp teeth, but he seemed aware of the danger.

The boy accepted my gift with a smile and removed the two fish to his reed house to be cooked. I’ve never eaten piranhas, but his smile gave me the idea that they tasted good.

Pacahuara: The boy watched The Fisherman blend into the river and disappear down its swaying path. Clasping the fish expertly by the belly, one in each hand, the boy bare-footed up the earthen path to his house, and his grandfather. His grandfather was unchanged when he arrived, but the thatched hut which had always been his home was somehow different, indigent, and a furrow creased his crown. Had the afternoon light changed?

Proudly, he raised up the two fish!

“Well done!” said the old man. “I sure hope that fella becomes a good fisherman one day. At least now he knows how to catch a fish.” 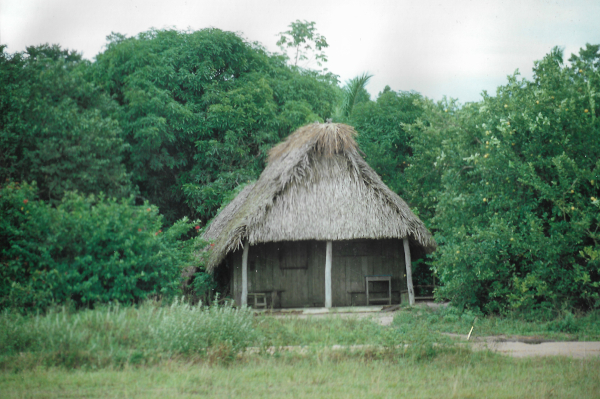 ¹ Adapted in part from the magical realism novel, 'The Spirit Wolf.'