The last time I was out with the River Folk I had a speculation, which I’d like to call a predilection.

I had the distinct impression, or was it just my imagination, that a fellow and a lady had some history together and … that he wanted for there to be a future. That being said, she sitting on my knee presented a particular type of problem for him, and he began to take my measure.

He said to me, “You’re sitting there looking pretty calm, cool, and collected.”

To which I replied, “When you’ve seen some of the things I’ve seen, you learn to not get too excited.”

I thought of a jungle cat from my memory—all those years ago.

I’d never been anyplace so remote. So … hidden away in time.

The people that live here, where the only roads are the footpaths along the rivers, and the rivers themselves, are called the Araona. They are a people of the mist. Their ancestors had, for generations, been captured and traded as slaves to work the rubber plantations. Two hundred and two aught years ago, some families escaped the realms of the Rubber Barons, and brutal slavery. The Araona are their descendants. They too, had good reason to be wary this night.

Here, near the banks of the river, I set out to work. With a window of satellites, in the days before a full GPS constellation, between midnight and four in the morning, I levelled up my equipment at the edge of camp. A single fisher bat flew overhead on its way to the water, wings drumming in time to the multitude of the birds and the insects. The hour before dawn is, by far the noisiest time in the jungle.

I was alone in the dark, at the edge of the light, when I heard a jungle cat screeching nearby and the forest grew silent. I pulled my knife from its sheath and I waited.

Tom cat was hunting. Hunting me. 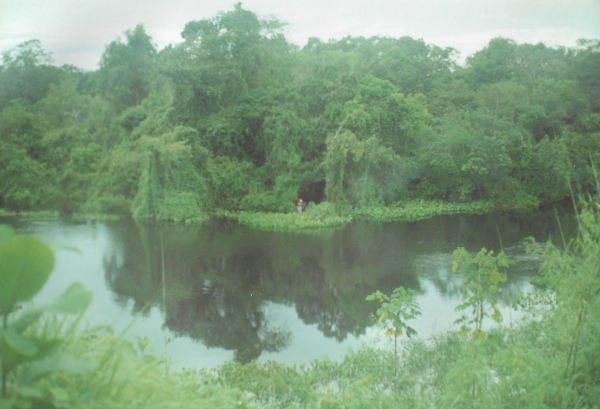 Footer
The South American Puma is similar in appearance to our Mountain Lion, but much thicker and heavier. A beautiful, graceful animal! Very formidable. Endangered. I told the crew at breakfast the next morning and they just laughed and said, "Oh, no. It's a monkey that makes that sound!" There is a monkey in Bolivia which makes a similar sound and they call sometimes, but I knew the difference and when you know that ... they're really not similar at all. "I know what I heard," I said. Two days later the cat, a male, was brought in to camp strung on a pole. It was killed by local Amazonians (Pacahuara?) and maybe with a poison arrow or trap for we never heard a shot. It was said the warriors were protecting us, protecting their families.

As the original (reactive) picture is relevant, adding both dimention and an element of truth, it is linked below. Please note I did not say I killed the animal, only that I was prepared to defend myself: Look at the cat and imagine it alive. Big, sinuous, 12 foot long with 2 inch claws. If the cat had attacked, if I had run, I wouldn’t be lounging around drinking coffee from a cup two days later looking, 'pretty calm, cool, and collected.' Think about it. What would you do? Would you fight or flee or would you lay down and sacrifice yourself to the noble cause?

¹ Adapted in part from the magical realism novel, 'The Spirit Wolf.'